The cornrow wig style has been described as a new, epic level of braiding as of today. It is a type of braiding that you have probably never seen before. Many people including famous Black and White celebrities like Kendall Jenner, Kim Kardashian, Beyoncé, Alicia Keys, Justin Timberlake, David Beckham, Fergie, and Gwen Stefani have sported the cornrow braid style.

What is so special about this style of braiding with African roots? To give you an idea about this braiding style, you may read further the information below about this stunning cornrow wig.

Cornrows are characterized by braided hair that is very close to the scalp that is formed in a simple and straight line that looks like a cane. This why it is also called a canerow. The cornrow is tightly plaited, (sometimes) greased, and combed.

Cornrows can also be formed in complex or curvilinear designs. Additionally, some wearers adorn them with beads or cowry shells.

Cornrows, also referred to as braids, originated in Africa. Women started to wear cornrows around 3,000 B.C., as evidenced in a Stone Age painting in the Tassili Plateau of the Sahara. Meanwhile, men wore cornrows up to the early nineteenth century in Ethiopia where warriors and kings have been seen wearing cornrows.

In the 1950s, many Black artists, activists, and intellectuals were seen wearing the cornrows and called it “Afro.” This is followed by some personalities such as Abby Lincoln, Nina Simone, and Odetta, who embraced the traditional African cornrow style. Additionally, the singer, Miriam Makeba, introduced this African hairstyle in the United States too.

Cornrows became popular in the 1960s and 1970s, and some west African immigrants were seen sporting cornrows in the United States during this period. In the 1990s, the NBA basketball player Allen Iverson wore cornrows. Likewise, hip-hop artists from Ludacris to Lil’ Bow Wow were seen wearing cornrows.

Hairstylists have innovated the cornrows with the emergence of complex geometric designs, which reflect the new Afro-Futurist movement. This style conveys that math is a part of African heritage.

Cornrows are still worn in West Africa, the Horn of Africa in areas including Eritrea, Djibouti, Somalia, Ethiopia, and Sudan. Today, cornrows have evolved into many different styles, including the form of a wig. There are many cornrow wigs available on the market now that you can choose from.

3. The significance of Wearing Cornrows

The following are some reasons that the wearing of cornrows as a hairstyle or wig is such a significant thing for some:

A. puts emphasis on Cultural Origin

Most wearers of cornrows want to stress their cultural origin, meaning their African roots. They want to express their traditions in the form of this braided style. It was thought that many Africans whether they were masters, slaves, kings, and warriors wore cornrows.

B. A Form of Self-Expression 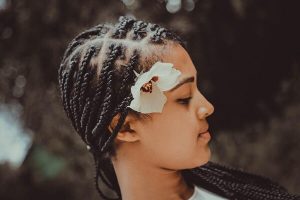 Some women have worn cornrows to express their personalities. They even adorn this braided style with fresh flowers, bottle caps, shells, corals, and twigs.

Cornrows will make you look prim with neatly plaited hair. Centuries ago, the slaves that worked in the plantation house wore cornrows because they were required to have a tidy appearance.

D. To Carry the Tradition

Cornrows are one of many traditional African styles. Most wearers want to continue their “Africanism,” and want to transfer the cultural values in the coming generations. For them, this braided style also symbolizes one’s status, ethnicity, age, religious beliefs, wealth, kinship, and marital status.

Cornrows come in two different styles, namely overhand and underhand braiding. Overhand braiding is the most popular and is often called French braiding. In this technique, the braids sit on top of the scalp and are created by pulling hair from the outside and adding it back in.

5. How to Do Cornrow Braids

With cornrows, you are essentially taking hair from the sides and at the middle, then braiding them on the scalp. You take and braid them from the inside out. The following are the steps you can follow to braid cornrows. You can do this on natural hair or on a synthetic wig.

A. Create Sections That You Want

First, create sections that you want to cornrow. Skinnier sections will have smaller cornrows, while large sections will end up creating bigger cornrows. You may use the tail of a rattail comb to create a section.

B. Part the Individual Section Into Three 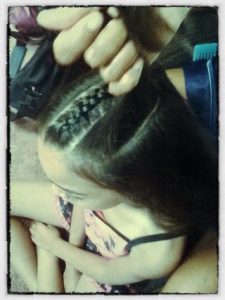 Each section must be divided into three equal parts before you begin braiding. You may begin by braiding the small section at the hairline.

C. Turn the Braid Into a Cornrow 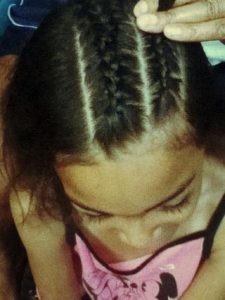 As you are braiding the section of the hair and picking up one of the three pieces of hair to braid, turn it into a cornrow by pulling hair from the parted off section and adding it to the one you are braiding. This process attaches the braid to the scalp.

D. Continue Braiding the Section of the Hair on the Scalp

You may continue doing the braiding pattern on the scalp and add more hair into the cornrow until you reach the end of that section.

E. Braid the Rest of the Hair 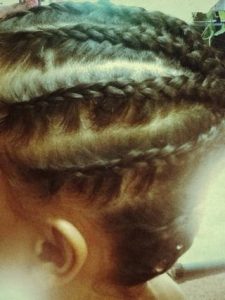 Continue braiding the hair that is not attached to the head, just like the regular braids.

F. Fasten the End of the Braided Hair 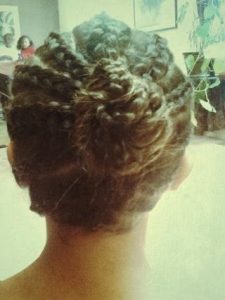 You must secure the end of the braided hair to prevent the cornrow from disengaging. You may use snap-free rubber bands or barrettes for straight hair. You may also make the end of the cornrows into a navel hairstyle just as shown in the photo above. Meanwhile, for those with natural hair, you may just curl them around your finger.

G. Repeat the Braiding Process Around the Head

You may repeat the process in other sections and observe the cornrow pattern. Make sure that you have sections that are of the same size to make the cornrow uniform to look at.

1. How Long Will Cornrow Braids Last?

Cornrow braids may last up to two weeks with proper maintenance.

2. How to Maintain Cornrow Braids?

You can simply maintain your cornrows by putting a silk scarf over it or use a bonnet to prevent frizzing when sleeping. To moisturize your scalp, you may use a lightweight serum or oil.

3. How to Wash Cornrow Braids?

Some people apply shampoo directly to their scalp and sprinkle some water. They then scrub their scalp with their fingers, squeeze the cornrows, then rinse. Afterward, they use conditioner and rinse their hair again.

4. Can Cornrow Hairstyles Cause Hair Loss?

Cornrows may contribute to hair loss. It may cause Traction Alopecia, which is when the cornrows are pulled intensely across the scalp. The good news is that you may still enjoy this hairstyle without having hair loss by wearing cornrow wigs that are available on the market now.

5. Does the Hair in Cornrows Grow?

Yes, the hair in cornrows grows. On average, human hair grows around 6 inches per year or about half an inch per month.

Yes, they can wear cornrow wigs in various styles and they look great in them.

Cornrow hairstyles and wigs may depict cultural heritage, particularly for Africans and African Americans. However, wearing cornrows may categorize the wearer and they may experience discrimination in some places. For other people, however, they may see this braiding style as trendy and awesome. It truly depends on how you perceive them. Do make it simple and let this braid be as it was a long time ago and as of today.